In The Faery Fort 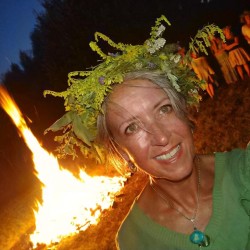 Journeying through the blessings, learnings, medicine, and adventures of my Crazy Ass Life... Why don't you join me?

This time last month I was running a Firewalk Instructor Training course in County Mayo, West Ireland.  When I first got there, little did I know that my personal journey was going to be at least as impactful as the training course itself, and nothing more so than the hugely powerful experiences in the Faery Fort, which I’m still processing and learning from now.

The Presence Of The Faery Fort

The venue for our training was a magical space to begin with – people got to stay in Hobbit Holes, and there were quirky signs and knick-knacks all around us.

And up on a hill in the cow field next door, there was a Faery Fort, a magical ring of trees, overlooking us.  I could feel its energy as I moved around the site, and so could others. It called to me, and shone a light on what we were doing.  It seemed to encourage a joy and laughter throughout our comings and goings, while still holding a heavy grounding effect for us all.

Getting to the Faery Fort was not easy, there was a mix of cows and barbed wire fences between us and it, but on the last day of the course, a small group managed to find their way in.

One of the course assistants (I’ll call her 7 Feathers here, in case she doesn’t want to be named) is very sensitive and tuned in to energies, and had an incredible encounter, where she went through the physical experience as though she was giving birth without prior warning…

A hugely powerful moment for everyone involved, unpacking it afterwards it was thought that the Faery Fort was probably a space that had been used by Doulas in its history.  A place for the shaman and spiritual women to go to give birth.

What I Lost, And What I Found

The next day after the delegates had gone home, 4  of us returned to the Faery Fort. 7 Feathers used divining rods to guide us through the trees, and we soon came to a space on the edge where the magical energy was palpable. She experienced seeing the Grandmothers, the women that had been there long before.  The experience of the presence of our ancestors was almost overwhelming. Then she said they were telling her to bow to me…. Anyone who knows me will not be surprised to hear that my response was ‘don’t f*cking bow to me’, but she felt they were recalling that I had been a powerful shaman who had lived there before, but died before my time.  Before receiving the accolade I had been due.

I was able to spend some time on the land there, that directly overlooked the site of our training.  The electricity in the energy flowed into a calmer, more peace bringing space, and after 10 minutes or so I rejoined the others and we moved on.

After spending some time at some other spots, 7 Feather’s rods guided us back and forth, almost just missing something, before we left the Faery Fort that day.  Finally she turned to me, ‘they want me to give you the rods’, but with them in my hands I wasn’t quite sure what I was looking for.

I took 5 or 6 steps in a fresh direction before my legs were literally taken from under me, and I buckled in complete, overwhelming grief. I stood and sobbed uncontrollably, steadying myself on a wee tree next to me. The wind suddenly picked up, and the whole tree moved in the strong breeze, which seemed to move right through me along with waves of sadness moving through my very core.

Slowly the grief left me, and I was able to look around where I stood.  My left hand felt firmly planted on the little tree beside me, and I felt it was the guardian of something I had left behind there long ago, before I even began. That an ancient ancestor had buried their baby under the tree, and now that ancestor was me. I allowed myself to begin grieving for the infant I had never known.  A process I have yet to complete, but know that the healing will continue to grow and fill that space I now know has always been there.

Maybe I had died in childbirth there too.  That I have no experience of, only of my own loss.

Well that’s a good question. I will be working out a way to enable the healing to reach the deepest places so that I can move forward with a lighter being, and a sense of completion.  And I will also continue my journey of reluctantly stepping into my power, that was started several months ago with a bag of gold healing dust I never asked for (more of that soon).

In the meantime I’ll keep leaning in.  For greater insights, greater understanding, and greater adventures… Why don’t you join me?!

Whatever your level of experience, join us for this Shamanic journey workshop that will guide you through finding your Power Animal Guide. We will begin with information on how to meet your Guide for the[...]
Mar
3
Tue
1:00 pm Chanting Meditation Group @ Shaman's Shepherds Hut
Chanting Meditation Group @ Shaman's Shepherds Hut
Mar 3 @ 1:00 pm – 2:30 pm

Meditating in a group is a powerful experience, that can also help keep you on track with your practice, and provide a space to learn too. Our time together will include at least two meditations,[...]
7:00 pm Chanting Meditation Group @ Shaman's Shepherds Hut
Chanting Meditation Group @ Shaman's Shepherds Hut
Mar 3 @ 7:00 pm – 8:30 pm